I’m apparently getting quite grumpy in my old age, because I’m going to have yet another grump about the women in WWE, and wrestling as a whole. I know, it’s as if I don’t do anything else, but this week, I think it’s merited, as the women have been showcased and highlighted and… still let down, I feel. Now, I know it’s been better than we’ve had before, but that doesn’t actually make it good. This is the problem with people saying things like ‘well, it’s better than the Attitude Era’, because while we may have made leaps and bounds in how the women are treated, that doesn’t actually make the situation we’re in now good or fair.

Let’s start with the time the women have been getting lately. Raw had a nine minute match, a two minute match, and a talking segment with Sasha, and SmackDown had a twelve minute match and a speaking segment to start the show. Now, that’s a serious uptick in match times than we were seeing before the brand split – but at the same time, women make up 20% of the WWE talent pool, and I’d like to see them get 20% of the televised time in return. 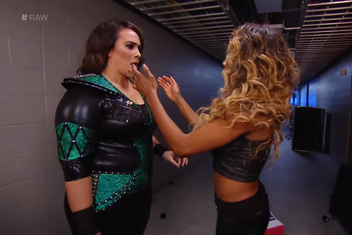 With Raw, the problems we’re seeing with matches is that we get the weekly Nia Jax squash, which is tedious even when we haven’t already had a Braun Strowman squash that night, and then we get a match that involves Charlotte. Raw has a roster of seven women: Sasha, Bayley, Charlotte, Dana, Nia Jax, Alicia Fox, and Summer Rae – this week we actually got to see six of these seven, but that was a rare one. And we haven’t seen Summer Rae since the draft, which makes me grumpy. When you only have seven people to write for, the least you can do is not forget one of them. Lana’s had more character development and time on the mic than most of the other women on Raw, and she’s not even wrestling televised shows!

On SmackDown, while their women have all been built well as individual characters, with their own desires and motivations, the big issue is the way in which they’re being used. The match for the new SmackDown Women’s Championship is a six-woman elimination match. The tag teams get a tournament, a series of matches leading up to a final between the two best teams. The Universal Championship got the same treatment over on Raw – so why is it okay to just shove all the women into the ring and let them fight it out like that, when they could instead have had two weeks of matches eliminating us down to two final contenders at Backlash?

Let’s also talk about how Rusev and Lana, and Miz and Maryse, were grouped as couples, rather than having the women be legitimate picks on their own, within the women’s roster. You can’t imagine Bayley’s boyfriend – Aaron Solow, whose 2015 Tough Enough video has him saying the words ‘Bayley’s boyfriend’ like they’re a curse – turning up and being placed as her valet, carrying her out, or covered in snap bracelets. And it’s not that it was done simply because these two couples are married, or were soon to be married – or not just because of that – because the point of female valets is, often, that they don’t wrestle. They don’t lead out their men and then get ready for their own matches, because heaven forbid a woman’s focus not be entirely about a man.

It’s utterly offensive to me that, in this video from May 2015, Solow sounds violently upset about the fact that people think of him as Bayley’s boyfriend. But we only have to look at Bea Priestly, a UK wrestler dating NJPW’s Best of the Super Juniors winner, Will Ospreay, and the comments she recieves over her bookings – that she’s getting her bookings because of who she sleeps with, and not that she’s a damn vicious heel with attitude for days and the skills to back it up – to know that Solow’s predicament is nothing new for women. Women in wrestling have been defined by who they sleep with for decades, and if it has been an in for many talented women in the industry, that’s only because it’s had to be.

This week on Raw, Sasha Banks gave us a wonderful speech – ignoring the bit where she feigned a retirement speech, which felt a little too worrying to those of us who have young retired favourites – where she spoke about how the women have made it in WWE. How there’s no more bra and panties matches, how the butterfly belt has been consigned to the bin, and named women who have paved the way for the route out of the sticky over-sexual quicksand that had been women’s wrestling previously. While I still think it’s appalling that the company are happy to acknowledge The Fabulous Moolah, who by all accounts basically traded younger female talent as sex slaves, but not Chyna, who did porn, it was good to hear Sasha give us her wrestling history, to talk about Trish and Lita as making huge strides for her generation of wrestlers.

The problem was, after this statement, she turned around and called Dana Brooke ‘Miss Piggy’ – which, when you’re already thinking about women’s wrestling, and the past, brings back thoughts of Mickie James suffering through being ‘Piggy James’ on live television. It was uncomfortable coming from Sasha, and felt like a weak line following something that was supposed to be empowering, and it put us in a weird place with her character, too.

Vince Russo waded in on this speech, too, saying Sasha was disresepcting a lot of talent that came up in the days of bra and panties matches, a lot of ‘fine athletes’ who wer proud to show off their hard work. No, Vince, Sasha’s throwing shade at your sexist idea to sell ratings using the bodies of women, which is something you seem pretty proud of. A woman being unashamed of showing off her body isn’t a problem, it’s when she’s being told to do it for the company or she’ll lose her job. Personally, I’d like to see Vince Russo on fire in a ditch somewhere – I wouldn’t waste my piss – but the worrying thing is how many people actually agree with him when he says things like this.

Russo also wanted to talk about how Sasha’s a hypocrite to take part in WWE’s bikini calender after decrying bra and panties matches, failing to see how that’s just another example of the male gaze and sexism in the industry – there’s no male version of this. I don’t get to look at Roman Reigns pouring water over himself on a beach, or Tyler Breeze bending over in trunks. Not because there isn’t a market for it, or it wouldn’t make money, but because the company believes it’s against the image they try to project, where the men are untouchable, and the women are commodities.

WWE doesn’t consider women as a large part of their audience, which is also why there’s fewer articles of women’s clothing, no women-specific clothing (skirts, dresses), and why women get a shorter amount of the show than their numbers should suggest. It’s not all about the male gaze being problematic, or that finding wrestlers attractive is a bad thing, but it’s hard to have a reasonable conversation about this when men who tell me they want to see more from the women, and who talk excitedly about Sasha Banks’ skills in-ring, still think one women’s roster should be ‘eye candy’.

I know this has covered a lot of topics, and has probably ceased to be interesting, but the main point is… women wrestlers deserve better than to be treated as if every small step forward is a huge leap, and as if those small steps mean that everything’s fine and equal now. It’s not, and until it is, we’re going to keep ripping the company apart for not doing something that – honestly – would be an incredibly easy change to make. Sexism in wrestling is a huge issue, and if WWE want to call themseves the industry leaders, or act like they’re the only company worth wrestling for, then they need to back that up – because at the moment, they’re not showing women that they’re either of those things.