*Disclaimer that this is an OPINION piece, roughly sourced, and drawn from a place of extreme annoyance.

If you’ve been paying any attention to wrestling news at all in the last month, you’ll know that Roman Reigns has been suspended.  Yes, not the good guy, not the bad guy, but the suspended guy.  Hilarious. Can’t you hear me laughing?  If you’ve been paying any attention to wrestling culture in the last decade, you’ll know that oh boy do the fan boys just LOVE Brock Lesnar.  I don’t know if it’s his massive pecs, his vaguely phallic chest piece, or his testosterone-leaking, grunting, uber-masculinity, but something about him makes the boys cream themselves faster than the first time they watched a bra and panties divas match.  The obvious conclusion then, at least to WhatCulture, was that Brock should replace Roman in the Battleground Triple Threat match for the heavyweight title.

Now I’ll be the first to admit that I am completely biased toward the three Shield men, so of course I had to take a minute to let the red mist dissipate before I could continue reading the article.  All hope of remaining even minimally calm and collected was lost, however, when I discovered that not only did they want to switch out Roman for Lesnar in the match, but that they also wanted to take the title off Dean Ambrose and give it to, you guessed it, the bellowing, bright pink tower of non-verbal man rage that is Brock Lesnar.  This I just cannot stand for, and thus you are about to be blessed with a list of the reasons that just hearing the name Brock Lesnar drives me to depths of anger so intense all I can do is fume while I shake my fists and scream internally.

No one else is allowed outside sponsorship, probably because Vince starts frothing at the mouth and growling if you suggest anyone else be allowed to make money or boost their brand off one of HIS stars, dammit!  Legend has it if you even have your booty call listed as “T&A” on your cell he’ll fire you (so my prayers go out to Dolph Ziggler).  But as every slow pan around Brock’s rear end in his saggy black shorts will show, however much they’ve managed to cut it down, Brock is getting that sugar daddy treatment from other brands and businesses.  This is the first of many ways in which Brock fits the Special Snowflake criteria, and given that Ellen probably had to sign her first adopted child over to Vince to get Cena wearing her face on his body, it irks me.

In alignment with the Special Snowflake attitude addressed above, Vince is so hardcore about owning these performers that until very, VERY, recently, it was just par for the course that they weren’t even allowed to keep their names when they joined the company. But not good ol’ Brock. He’s so special that not only has he kept his own name, but he’s worked across two promotions while being pay-rolled (I assume) on both.  And it’s kind of a delicious irony that the two promotions he’s working across represent extreme opposites in sports/entertainment.  CM Punk probably spent three days crying into AJ Brook’s hair while she patted him with one hand and worked on her book with the other when the news broke.

He’s the poster boy for hypocrisy in the fan base 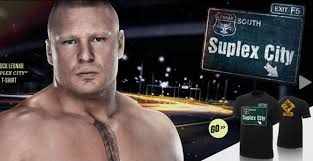 Now this is more of a beef with guys like Brock Lesnar Shirt Guy and the mental attitude he embodies, but it’s going in the list anyway.  Y’all have incessantly dragged hard working guys like Roman and industry veterans like Cena for the infamous “Five Moves Of Doom”, but Lesnar is the only guy I can think of whose merch is based predominantly off a move instead of his name.  And no, different types of suplexes don’t really count as different moves when we’re counting for a move-set.  To quote Gimli, “it still only counts as one!”

Secondly, if I hear about “tater tots” or “sufferin’ succotash” one more time, I’m going to snap.  Because you can say all you want about Reigns’ promo work and his talent or lack of with a microphone, but at least he’s improved and does his own promos.  I would rather listen to Jerry Lawler commentate on a breast augmentation surgery than listen to a Lesnar promo (one of those mythical, magical unicorn types of promos that only happen when the stars are in position and the blood of a man not born of a woman has been spilled under a blue waxing moon).  Because Brock just can’t handle a mic.  I laughed so hard I nearly choked to death the first time I heard him speak, and I’m sure that even his most die-hard fan would admit that 90% of the hype for a Lesnar match comes from the genius that is Paul Heyman.  But, you know, boo Roman Reigns.  It’s gross that you worship in Lesnar the exact things that you condemn in others.

Yes, I said it.  The only thing that interests me about a match with Brock Lesnar is who his opponent is.  I’m into CZW, and I genuinely used to think that a match wasn’t a real match unless somebody was bleeding, so I appreciate the art form that pain can be when it’s used properly in the ring.  But 16 suplexes is not an example of that.  Brock’s matches are straight up boring because a) he’s practically guaranteed to win (the same thing you attack Cena for) and b) the majority of the actual ring work has to be done by an opponent who’s just been put through the canvas.  The go to attack on guys like Roman is that they’re constantly being made to look strong, but when was the last time Brock demonstrated any in ring skill apart from ‘lift heavy thing, throw it, use MMA hold because ooh how exotic, repeat’?

Disregarding the fact that Brock looks like an albino gorilla with sunburn when the match really starts to get going, the most frightening aspect of his ring work is the way he approaches it: you always get the vibe that this is a man who doesn’t really care about the person he’s working with, because he’s slipping back into the UFC mindset.  It’s as if he thinks he’s actually fighting to prove his dominance, instead of in a choreographed, cooperative performance between two athletes who are supposed to be working together.

The rarest man on the roster

Remember me saying that 90% of the hype for a Lesnar match comes from Paul Heyman? Well the other 10% comes from the fact that it’s so damn rare for Brock to actually show up that even seeing him just walk around backstage in sweats will send whole swathes of the crowd into a faint.  How can you justify putting the title on a guy that defended it four times in a seven-month reign (with two of those defences actually happening in one night, one match, at 2014’s Wrestlemania)??  Lesnar doesn’t do house shows or non-televised events (not including Beast in the East which was a tour named after him), which feeds into my next point…

If there’s no money involved, he couldn’t care less about wrestling. 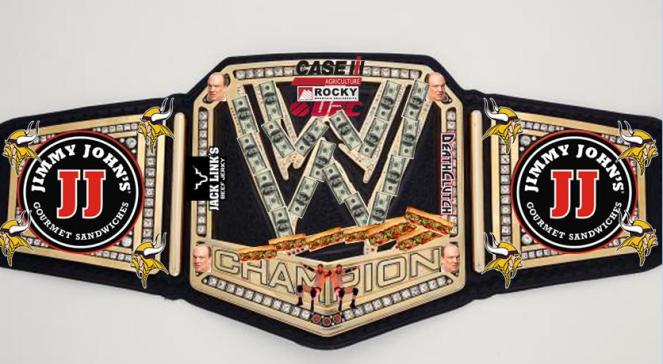 It’s a long-standing fan in-joke that Brock is in it for the Benjamins.  He’s got a track record of dipping in and out of wrestling whenever it suits him to pursue other, ‘realer’ sports, and then coming back in with an open palm when he fails to make it in those sports.  It doesn’t feel like he cares about the industry at all, which is especially galling when you look at his record: youngest King of the Ring winner, youngest Royal Rumble winner, “Youngest person to win the WWE Championship” (quote unquote Guinness Book of World Records).  This is the man that ended Taker’s streak (another thing I will be permanently salty about).  And then, because money makes money, he was put on the cover of 2K17.  I can’t help but think that an honour like that will be slightly lost on a guy like Lesnar, who is used to being the draw card because he’s big and nasty and people know his name.  And you can argue about talent deserving money all you want, but I haven’t heard of any of the other wrestlers abusing their potential money value the way Lesnar seems to. 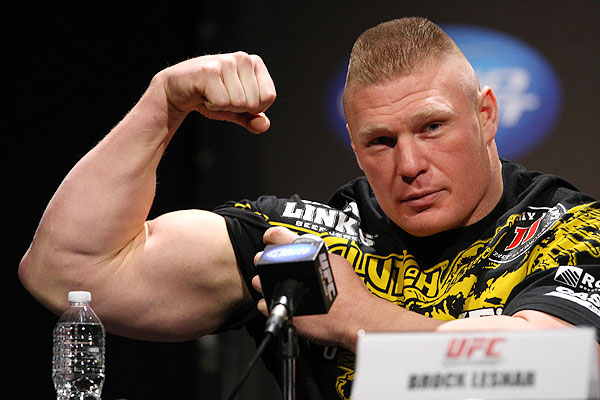 There are other, more personal things that I could talk about, but let’s face it if I start complaining about the fact that he’s a Republican and a member of the NRA, I’ll have to talk about half the bloody roster.  I do have a few bones to pick in relation to that specific WhatCulture article, though.  Firstly, you stay the f*** away from my Shield triple threat match.  I’ve waited through two and a half years, two different injuries, and now a suspension (ugh) to see those three tear each other apart for that title, and if you think for a second that you can just slide Brick Lobster in there instead you’ve got another thing coming, pal.

Secondly, to suggest replacing Roman with Brock because Roman has been suspended is just ridiculous, and now it’s also potentially hypocritical.  I won’t pretend to know what Roman did, the same way I won’t pretend to know what’s going on with USADA flagging Brock for banned substances (twice).  But surely, if you’re so worried about the message it sends to have Roman in a title match straight after his suspension ends, you’d agree that having a potential doping cheat (who also competes in non-scripted combative sports) in a title match also sends a questionable message.

Lastly, to suggest taking the title off Dean and giving it to Lesnar is abhorrent to me.  To do so would be another nail in the wrestling industry’s coffin in my eyes, because it would tell everyone out there looking up to these people that it doesn’t matter how hard you work, or if you dedicate your life to it.  All that matters is how hard you get Vince McMahon and smarks like Shirt Guy because oh boy you’re a REAL fighter who causes REAL damage and makes REAL money.  Nobody deserves that title more than Dean right now.  NOBODY.  Jon Moxley gave (like so many do) a hell of a lot years, blood, sweat, and tears to even get his foot in the door to become Dean Ambrose.  I’m suspicious of the way they’re handling his title run anyway at the moment, with them drafting him to SmackDown and the subtle change of the title name, but to let that MMA bandwagon opportunist have the title out of Dean’s hard working hands would be an insult to every performer who ever stepped into a ring to wrestle with a love for the art form in their heart.