We open with a ten bell salute in honor of Memorial Day, closely followed by a video package of various superstars reciting a presidential speech. Most of them are dressed up, but Roman, John Cena, and Dolph are wearing their own t-shirts and Dean is wearing some kind of random Las Vegas shirt. It’s pretty jarring and we’re all suddenly very uncomfortable about coming here to watch grown men beat the snot out of each other. 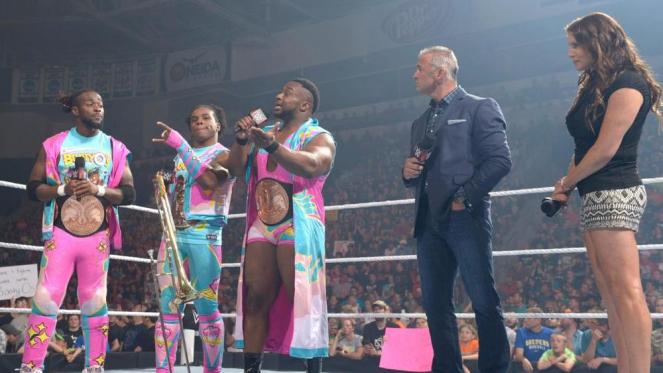 Shane O’Mac comes out for the traditional Raw opening monologue, and he’s quickly joined by Steph. I guess it’s supposed to be like she interrupted him, but they must have been standing together at Gorilla, right? Also they’re supposed to be doing this together so technically HE was the rude one, right?

Shane makes fun of her for talking too much in her introduction, then makes a longer introduction, and Steph owns him hardcore by comparing him to the Miz. They announce that the brand split is officially coming back, and the New Day Comes out to register their concern – will they break up the New Day???? The real story, of course, is that Shane and Steph continue to act exactly the same but for some reason we’re supposed to think that Steph is evil for some reason. The McMahons make sure that everyone knows that literally nothing has been decided about the brand split yet – always a good sign – and then there’s a dance challenge!!!!!!!

Proving their heel cred, the Vaudevillians deprive us of seeing Steph dance by interrupting her with their entrance. When we come back from commercial, the boys all already in the ring and JBL makes sure that we know that a herd of unicorns is called a “glory” of unicorns. Fascinating!

The Vaudevillains get the heat on the New Day through two commercial breaks and then the Club pops out to spoil the party. The Vaudevillains ain’t fucks with that and bow out to let the Club get the beat down and pose over the corpses.

Renee asks the Club boys what’s up backstage and they announce that AJ Styles is a BIG STUPID MEANIE FACE and they don’t NEED him and he’s not ALLOWED IN THEIR CLUBHOUSE ANYMORE.

They replay the clip of Sheamus attacked Apollo Crews backstage, then cut to Apollo doing push-ups backstage. The Big Show shoves his dick into Apollo’s face and declares that he don’t give a fuck about eras because he’s A) old and B) not replaceable. He tells Apollo not to be a lil bitch and just kill Sheamus, then walks away, leaving Apollo looking thoughtful. “Maybe I should have gotten my law degree about all,” Apollo thinks.

All this New Era talk is immediately undercut by Golden Truth dancing out, performing a “remix” of R-Truth’s rap. We all think about Awesome Truth and shed a little tear.

The Usos uso at us all. Related, I finally learned a pneumonic to tell them apart: Jimmy and right both have an “I” in them, and Jimmy paints the right side of his face, and ditto with Jey and left. R-Truth calls Byron Saxton “Coach” again because racism is still funny!!!!!! I guess!!!!

Tyler Breeze and Fandango are the best couple since Triple H and Steph and I love them. They call Golden Truth “Golden Poop” and then laugh at their own wit. How can people say that the PG era isn’t great?

Tyler gets knocked out while trying to cheat and Fandango gets pinned, ending Tyler’s brief but glorious win streak. Fabreeze attacks Golden Truth for no reason and then Golden Truth are suddenly a great tag team? Because that garbage fire definitely needs to be pushed over the greatest team up in recent memory.

Roman comes out to thunderous boos, and the camera zooms in on all the pro Roman signs they can find. I make angry hissing noises the whole time Roman is on screen. Roman makes the terrible “the man vs. the guy” statement that we’ve all been dreading and it’s just as terrible as we all feared. He also says that Seth can’ be the Man is he runs away and that Roman is the Guy because he has the title, ignoring the fact that Seth only called himself the Man after he won the title, but okay.

Seth comes out in his silly pants and repeatedly tries to hype himself up to go to the ring, where Roman is clearly going to beat the shit out of him, but ends up grabbing a mic and pacing the top of the ramp instead. He makes like he’s going to talk, but then, for the first time ever, decides not to. There then follows a weird sequence where Seth keeps teasing that something might happen but nothing does. Some people chant boring. It seems like Vince finally found a way to make us boo Seth – not let him speak or wrestle or do any of the things he’s good at.

I forgot to mention this earlier but they keep advertising the World of Warcraft movie thoughout the night, including a spot that makes it look like Kane is in the movie? I suddenly understand nothing.

Rusev and Lana come out to squash Zack Ryder, and apparently enough time has passed since Rusev’s last US title run for Rusev to be undefeated instead of “never pinned, never submitted.”

JBL makes the funniest call of his entire career, declaring that Zack Ryder could win tonight. Pfft! Bizarrely, however, Zack actually gets a fair amount of offense in during the short match and the crowd loves him the way some of us love adorable puppies.

Zack taps out, of course, and Rusev cuts a promo calling Zack entitled, and Titus O’Neil returns from his time out in Vince’s basement to declare that Titus isn’t a real American because real Americans fight. Immediately after Rusev fought Zack and beat him totally clean.

Then Titus cheap shots Rusev. Who just wrestled, while Titus is totally fresh. Hooray for the American spirit!

Primo and Epico do another tourism board bit while looking like they long for the sweet embrace of death. “At least the matador masks hid our shame,” you can see then thinking.

We get one of those great WWE video packages about the Flair family falling out complete with testimonials by other superstars. My favorites include Dean vicarious joy at seeing someone humiliate their father and the Usos implying that they’re yelled similar shit to their father, but not in public.

Steph rips Charlotte a new one backstage, because that bit where she slapped Ric happened longer than two hours ago, so we’ve all forgotten it. 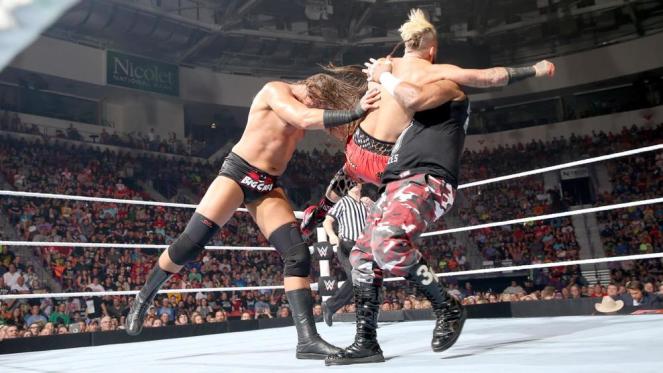 The Realest Guys in the Room come out for a promo, and get a bigger reaction by listing kinds of cheese than some people get winning matches.

The Realest Guys in the Room face off against the Dudley Boyz. Is it just me or has there been kind of a lack of wrestling content in this episode?

The commentators keep talking about how anything can happen in the upcoming brand split and your favs could be split up, but they haven’t established if there’s being a draft or what so it just sounds like decisions in the WWE are made by people who don’t care about the finished product OH WAIT. Anyway the realest guys in the room win.

There’s a backstage segment in Babe City. The main joke is that Dean is racist against Canadians, but the sheer Babe concentration makes it work. Cesaro continues his tenure as Guy Who’s Probably Made It With The Whole Shield and Sami misses the days when KO was HIS asshole, instead of just AN asshole.

John Cena officially Returns, even though he was at Wrestlemania and he was out on the ramp earlier for the ten bell salute. He gives an impassioned speech about how we all have the freedom to do and say what we want, which is kind of undercut by the fact that he policies the behavior of his coworkers more than any other human alive.

He also makes sure we all know that no one is allowed to be successful in the WWE without his say so, which summons AJ Styles from the back. Everybody loses their collective shit.

AJ starts to put over John, saying that he was always the first one to get there and the last one to leave, which is bullshit because we all know Seth was the last to leave because he’s the slowest at dressing. The crowd also what’s AJ saying nice things to John, as is their wont. John briefly looks like he’s going to Harry Potter AJ’s offered handshake, but ends up taking it. Of course, the Club can’t handle AJ having other friends and they storm out to shout about it. Remember the Babysitters’ Club Books where one of the girls started hanging out with someone else and everyone turned on her? It’s like that.

In a SHOCKING TWIST, AJ turns on John and joins the Club boys in wrecking him. Everybody too sweets to glorious boos.

Because weird fake outs are the theme of the night, AJ gets halfway to the back before he runs back to the ring to beat on John some more. And again. And again. Whoever told the writers that “almost doing something but then not doing it” was the new hotness should please clear out their desk by the end of the night.

We get Natalya vs Dana Brooke with Charlotte at ringside. Charlotte immediately starts cheating. Those Flair genes, man. Dana pins Natalya in less time than it took Rusev to beat Zack Ryder. Just throwing that out there.

Charlotte and Dana get the post-fight beat down on Nattie and Becky charges out to kill them. We awkwardly realize that not a single member of the locker room felt to compelled to help John during the like 20 minute beating he just received.

Jojo interviews Dolph about the time Baron Corbin hit him in the junk. Dolph maintains that it doesn’t count because you’re not supposed to hit people in the junk in wrestling. He tries to do Chris Jericho’s armbar bit but he only has like 30 seconds so it doesn’t really have the same impact. I hope his rematch is just Corbin holding him in an armbar while he flails helplessly for fifteen minutes, and then Corbin just stomps on his dick and leaves.

Dolph and Corbin have a match and Dolph puts on a helmet and a mouth guard as if they were about to have an amateur wrestling match – then hits Baron Corbin still in the junk. Except… it was legal when Corbin did it and Dolph is literally just being a whiny baby sore loser.

Canadian Heels and Del Rio bicker backstage. Jericho keeps talking about the fact that he invented the Money in the Bank ladder match, as if that gives him the advantage. I just invented the milkshake drinking contest but my lactose intolerance would probably prevent me from winning it.

Babe City faces off against Heeladians and Del Rio in the main event. North America – the USA keeps having dissension in their ranks due to the sadness and loneliness in their hearts. Finally the Heeladians can’t take it anymore and start squabbling with each other, leaving themselves open for Cesaro to get the drop. Tired of being ignored, Del Rio jumps Cesaro and we fly into a flurry of counters, ending with Dean getting the pin on KO. Babe City reigns supreme!