Welcome back to SmackDown, the last show before Extreme Rules this weekend. And of course, that’s how we open the show. We start with a video package taking us through the build to the fatal fourway for the Intercontinental Championship, with a specific focus on the most recent episode of RAW and the tagteam match of Kevin Owens and Sami Zayn vs Cesaro and The Miz.

Mauro Ranallo introduces us to the show proper, and we discover that the Miz and Maryse, as well as Sami Zayn, are also present on commentary for the opening match of the evening.

Kevin Owens’ music hits and he makes his entrance before I even realize that we are launching straight into a match, followed by Cesaro. I know it’s just the one very nice tearaway suit, but every time I see Cesaro make his entrance this way, a part of my mind imagines a very distressed tailor in a pile of suits backstage weeping.

After the match, of course, Cesaro hits Miz with a European Uppercut, then Sami hits Cesaro with a Helluva Kick, so Miz hits Sami Zayn with a Skull-Crushing Finale. By this point, of course, Kevin is most of the way up the ramp, and he applauds the three men mockingly and shouts at the Miz, “I’m getting my title back!”

There’s a brief aside before anything else about upcoming segments for the evening. Roman Reigns is facing off against Luke Gallows later tonight, and apparently “Chris Jericho checks into the Ambrose Asylum”. I’m already not really thrilled about this, but when one of the commentators decides to double down on this and announces over this graphic that “The one place you never want to find yourself checked into is an insane asylum”, I make an angry noise so loud that I think my neighbours are a little upset with me. Well, they can be upset. I’m too mad about this whole thing.

Paige’s entrance also takes me by surprise, the show moving at a slightly faster clip than I expected, and when we come back from commercial we discover that Becky Lynch is on commentary for this match. As Dana Brooke makes her way to the ring, Becky explains to us that being poked in the eye is the worst injury she’s ever sustained, because double vision means she has to see her face twice. That’s some trash talk that really made me laugh, which is very welcome right now.

All in all that was a fairly bland match, and only a shade over 3 minutes from bell to bell. Dana gestures and appears to be trash-talking Becky as we cut away.

Renee Young is interviewing Rusev and Lana, and we have a brief recap of Rusev’s brutality on RAW this past week. As an explanation, he says that he was “making Kalisto humble” and that he is the greatest champion and plans to retake his title at Extreme Rules. 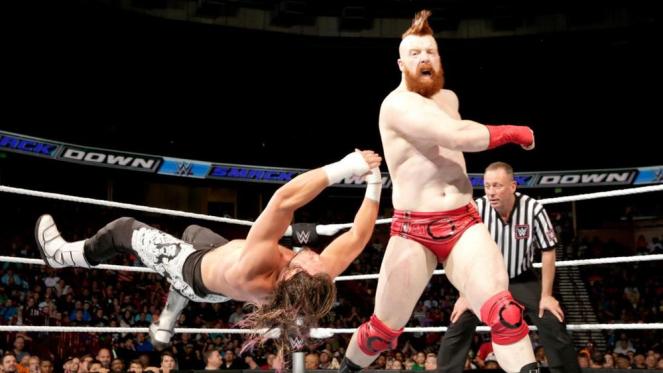 In preparation for Ziggler’s no disqualification match against Baron Corbin at Extreme Rules, Ziggler is facing Sheamus tonight. Sheamus is luminescent as usual, and Ziggler’s hair is kind of starting to grow on me. What’s happening?

Ziggler stumbles to his feet to celebrate his victory for just a moment, but he looks exhausted after the match as Baron Corbin’s music hits and his Extreme Rules opponent makes his way to the ring. Corbin tells Ziggler that “no disqualification” means that he’s going to hurt Ziggler and there’s nothing anyone can do to stop him. Ziggler simply beckons Corbin to bring it. 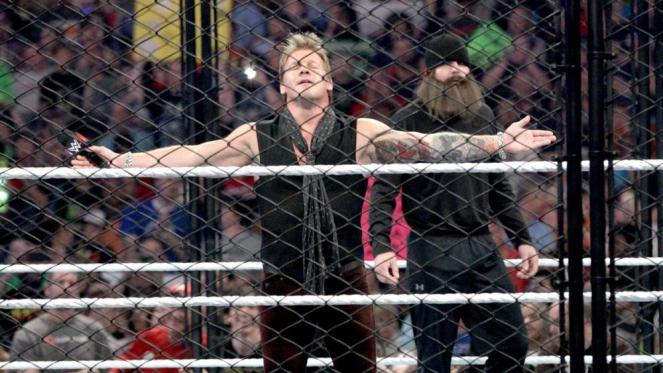 Someone is really invested in the asylum match being really terrifying, as there are flashing lights and ominous, horror movie inspired music as we come back from commercial to the sight of the steel cage hanging over the ring. Chris Jericho’s music hits and he makes his way to the ring, and we get a brief recap of the feud between Jericho and Ambrose – Jericho brutally murders Mitch the potted plant, Dean destroys Jericho’s needlessly expensive jacket, Jericho puts Ambrose in a straitjacket, all leading up to the steel cage match at Extreme Rules.

Jericho takes a microphone and tells the crowd to be quiet eight times, reminding me powerfully of an assistant principal at an assembly, before he starts to cut a promo about his upcoming match. The steel cage drops over him, and he claims that not only is he smarter than Dean Ambrose, he’s also crazier – people call Dean “the lunatic fringe” but Jericho claims that he, Jericho, is a real lunatic, as evidenced by his actions on SmackDown. More than that, he put Dean in the hospital overnight by breaking Mitch over his head, and he figures that after the match on Sunday, he can get Dean in hospital for another 40 days, breaking down how many days of hospitalization each item in the cage is worth. I’m suspicious of his math, as his numbers don’t add up and I’m fairly sure that Dean’s injuries could heal concurrently, and also this whole promo is fairly ridiculous.

As we are invited to drink in the gift of Jericho once more, a stagehand with a glorious beard walks into frame behind him. Someone have a talk with that man, you’re not supposed to be on camera. You’re ruining the gift of Jericho. Oh, but wait! It’s Dean Ambrose, wearing a false beard and moustache.

Ridiculous fades away to terrifying as Dean throws off his disguise and shoots the deathstare that we’ve all come to know and love at the back of Jericho’s head, before attacking him. As Jericho is on the ground recovering from having his head thrown into the cage, Dean climbs up to fetch a kendo stick and hits Jericho with it until Jericho opens the cage door and flees. Dean kisses the kendo stick and gestures wildly to his cage, as Jericho yells trashtalk at him from the ramp.

MATCH: The New Day & Big Cass vs. The Vaudevillains & The Dudley Boyz 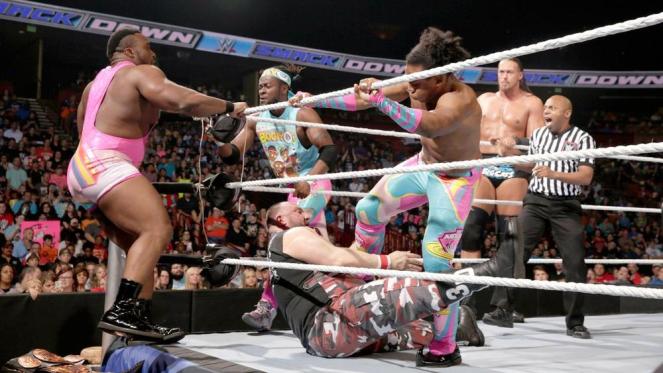 The New Day make their excitable way to the ring as they always do, filling me with a certain joy, and they look so happy to have Big Cass joining them, which just makes me even happier. The Vaudevillain’s entrance is interrupted by a recap of the time machine business from RAW, and a part of me still can’t believe that this is a sentence I am saying.

The New Day gather in the ring for some celebrations, including a nice big hug between Xavier Woods and Big Cass, while the Vaudevillains and the Dudley Boyz look salty at ringside.

Before the main event, there’s a recap of the feud leading up the women’s match at Extreme Rules. Jerry Lawler dismisses Mauro Ranallo talking about Ric Flair being banned from ringside at the upcoming event, saying that he’s just jumping on the anti-Ric Flair bandwagon, but Byron Saxton pipes up that Ric Flair deserves to be banned from ringside. We see a video of the feud starting with the screwjob at Payback – Charlotte talking to referee Charles Robinson to confirm that Natalya verbally submitted, Natalya slapping Ric Flair, Stephanie banning Ric from ringside for the submission match at Extreme Rules.

This segues into Natalya starts out by talking about the history of the Sharpshooter in her family, then Charlotte talking about her father beating everyone with the Figure Four, and how her Figure Eight is even better still. We recall, of course, that Charlotte has tapped to the Sharpshooter before and only did not lose the title because of the shenanigans, and we end with a replay of the moment from RAW with Natalya making Charlotte tap and hoisting her title proudly.

Before we get into the main event, we get a quick “this just in” — the Usos and Gallows and Anderson will, in fact, have a match at Extreme Rules this weekend, thus justifying the fact that we’ve repeatedly sat through them fighting on behalf of their friends for weeks now. They are set to have a Tornado Tag Match, which is actually kind of cool. 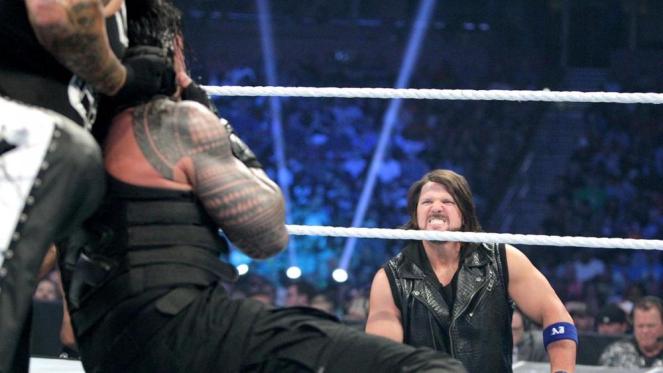 Luke Gallows and Karl Anderson make their way to the ring together, followed by AJ Styles. With the three men waiting in the ring, The Usos enter, followed by Heavyweight Champion Roman Reigns. I can’t stop looking at the “Don’t Boo Roman” sign in the crowd behind them as they get set up for their match.

While Roman Reigns is collapsed from the Boot of Doom, AJ collects some steel chairs and throws them into the ring. However, the Usos have clambered into the ring and attack Gallows and Anderson before they can make use of the chairs. AJ enters to clear the ring, sending Roman out with a dropkick before moving to clear the commentator’s booth.

This is clearly not going to end well for him, as when he moves to pick Roman up, Roman reverses it and throws AJ into the table. Gallows tries to attack Roman from behind, but is intercepted by both Usos who start to brawl with Anderson and Gallows. AJ hits the Phenomenal Forearm on Roman, then grabs him and together they roll over the booth as we fade to black.

See you all on Sunday at Extreme Rules!