This article is going to be serious, and probably not any fun for anyone to read. Therefore, I’ve filled it with the prettiest gifs of Roman Reigns that I can find for you. You’re welcome.

Samoan Thor. Samoan Sex God. Samoan Fabio. Samoan Superman. All nicknames used broadly by fans on Tumblr, and all nicknames I have a huge, huge problem with. Now, let’s start off by saying that I don’t want to point fingers here. I’m not interested in pointing out specific people and telling them they have to change the way they do things, I’m trying to look at an overall theme and see just how it came about, and where it stems from. Secondly, yes, I’m aware that ‘Samoan Thor’ is used for The Rock’s character in The Fast and the Furious 6. 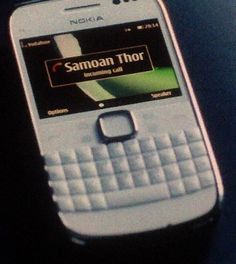 Roman Reigns comes to us via the Anoaʻi family, a decorated Samoan wrestling family that goes back to the early 1960s within wrestling. With his grandfather becoming blood brothers with Peter Maivia, grandfather of The Rock, the two families cemented a wrestling dynasty that has spanned generations, and been prevalent in a huge number of wrestling promotions. There’s clearly a lot of weight to being part of the Samoan wrestling dynasty, and this has been especially true since the meteoric success of The Rock. It’s perfectly acceptable, and indeed encouraged, for people to enjoy the stardom of their favourite wrestlers especially when – and let’s not be coy about this – they’re very, very good looking.

Roman Reigns is hot. There’s no denying that, he’s got classic good looks and a body to match because looking good is literally about a third of his job, and he does that part very well. He’s gorgeous. I could go rhapsodic over various faces he makes and the way he looks, but I don’t need to, because you just need to look at some pictures. Take a five minute google break. Sigh a little. Scroll through this article. He’s pretty, okay? The issue I have is when nicknames calling him pretty start to become racially coded. There’s very few other superstars where you’ll find their race hardwired into nicknames, and even fewer where those nicknames refer to attractiveness. We’ve had Mark Henry in the Sexual Chocolate gimmick, but I think we can all agree that was a tasteless time in the early 2000s, and that we’d like better gimmicks for our wrestlers of colour these days.

Firstly, Reigns is half Italian, but he’s never coded as Samoan-Italian Sex God when you see it in Tumblr tags or gushing comments about his attractiveness. I guess at least ‘Samoan Fabio’ vaguely addresses that. Things which are remarked upon end up with phrases like ‘caramel skin’ and ‘wild and untamed hair’ and eventually there’s only one place that this leads, and that’s the word ‘exotic’. Exotic is a word used by white people to talk about how attractive they find a person of colour, and to express that this is a) surprising, and b) an adventure for them. It’s been a long-running history with white people fetishizing people of colour – from East Asian women being seen as demure and quiet, but also secretly really kinky in the bedroom, to black men being seen as sexy and strong, but also frightening and violent. Racial fetishizing is a way of allowing white people to view people of colour as less than them, but still be able to sleep with them.

This is why the tags around Roman Reigns on Tumblr upset me, this is why I don’t like to see him tagged as ‘Samoan’ anything as a characteristic. It feels too much like people are saying ‘he’s pretty, and The Rock is hot, and his cousins aren’t bad…’ and lumping together an entire race of people. The reason Reigns doesn’t get called Italian? Everyone in the US knows someone who knows someone who’s Italian, especially if you’re on the northern part of the east coast. But there’s only – at a rough estimate – 622,000 people in the world who identify as Samoan, and the novelty factor is a big part in racial fetishizing.

Now, when we talk about WWE, and Vince McMahon’s booking, there’s a pattern that’s pretty racist, and a lot of gimmicks can be pretty racist too, with wrestlers of colour being side-lined, played for laughs, seen as especially uncivilised or frightening, and frequently not being allowed to talk very much. Being part of the Samoan wrestling dynasty gives Roman an edge, because Vince wants a new version of The Rock, who won’t leave him for films, so here, the racial bias does something good for Roman, placing him directly in the eye line of the CEO of the company.

But that’s just another form of racism, wanting to compare Roman to his famous cousin, expecting him to thrive simply because of a non-blood relation and a racial background. Vince even expects us to think the same way as him, and just go ‘oh, same ethnic background, same person’ and treat Roman like The Rock. You’ll note that the same characteristics shared with Roman and Tamina don’t work in Tamina’s favour – both of them are built well, strong, physically imposing, and attractive in a sever, almost frightening manner when they look displeased or smouldering, but those are selling points for Roman. For Tamina, they don’t work – women of colour once more getting the short end of the stick.

Look, I’m not denying Roman’s attractive. And I’m not saying that the people using these nicknames are racist, or are deliberately doing this. Some will be copying things they’ve heard in films, or that they’ve seen other fans say. Some will just think the alliteration on some of them is funny. Some won’t care that there’s some racial bias around them. And I’m not here to tell you what you should and shouldn’t do.

But, if you look at the way you’re phrasing things, and you look at the history behind why you say them, the ‘othering’ of people of colour, and treating people like things, you might just decide to stick to cute and sexy nicknames that aren’t racially coded.