It’s been a long two weeks without our regular dose of kay-fabulous gossip, darlings, and your throats must be simply parched without the sweet, clear, cool water of homosocial dalliances. Never fear, sweethearts, we’re back, and just like those rumours of Triple H’s… sledgehammer, we’re bigger than ever! Double everything is always better, just ask the bottom in a double penetration scene!

So, we’ll start off with what made everyone’s hearts all a-flutter, which was known loverboys Dean Ambrose and Roman Reigns giving us a sneak peek of their travel arrangements. We learnt that Roman is a little insecure about the idea of bottoming to Dean, even after so long together, but Dean seems to take that well – and really, what business is it of ours if he’s not ready to switch it up in the bedroom? We also learnt that Roman’s pet name for Dean is – as we all secretly suspected, let’s be honest – ‘babe’. So sweet of these two to let us into their lives like this, and what a wonderful treat for us before WrestleMania. 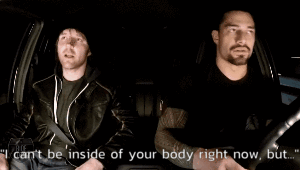 So, let’s move on to the night of nights, the one we’ve all been waiting for, the gayest night in our wrestling calendar. Now, before we get to that, we’ve got to look at the Hall of Fame, a star-studded event of red carpets and boys in suits. Now, we’re not going to go into detail about this, darlings, but we do have to note that known playboy Dolph Ziggler was spotted getting very cosy to recently separated Chris Jericho at the event, with the two making corresponding facial expressions and simpering at each other all night.

Chris Jericho, you’ll remember, has been toying with new addition to WWE, AJ Styles, for quite some time, but the two of them have been on the outs in the run up to WrestleMania, with it starting to look like they might never get back together. They made such a pretty couple, and the chemistry was always there, but as we saw at WrestleMania, sometimes those with the strongest and fieriest love are those who just can’t seem to stay civil to one another for long enough to let that spark mellow out into something sustainable. AJ lost to older and wiser Chris on the grandest stage of them all, but there’s some good news for him heading into the rest of the year – he’s going to be up against Dean’s boyfriend, Roman Reigns, for a shot at that gauche, gaudy title these boys fight over. Maybe AJ can tempt Chris back with some of that gold – or maybe he’ll find himself a bran new lover, who doesn’t shout his kinks to the whole world.

Speaking of old lovers, another WrestleMania surprise was the return of three legendary men, the likes of whom we can only dream about. Forefront in this was renowned slut and pretty boy Shawn Michaels, who may be less of a Heartbreak Kid these days, but is still able to drop everyone’s pants faster than a Stone Cold Stunner. He might not be getting any younger, but our sources say the current roster talent are still desperate to bend over for him – some things never change. Out to cause mayhem with his old friends at WrestleMania, Shawn showed off his rippling back muscles, and proved that some things just get better with age.

Fandango’s been showing himself off recently, and had a little altercation during the battle royal that let him show his moves off to great effect. We don’t see him often, but when we do, his sparkly pants and wild gyrations never fail to please. Maybe we should point AJ Styles in his general direction – after all, he likes them with dad bods and sparkly clothing, so Fandango fits the bill. Then again, perhaps AJ prefers older men; in which case he should have spoken to Shawn at WrestleMania!

Heartbreakingly, the League of Nations have had a falling out, and being left behind from this gorgeous foursome is handom Brit, Barrett. His long-standing Irish husband, Sheamus, got his two other boyfriends, Rusev and Alberto Del Rio, to keep him in the right as he broke up with him hugely, publically, and all on live television. Now, there’s ending a relationship, and then there’s really ending a relationship, and these WWE boys just seem unable to do things the easy way. Barrett’s heartbroken face says it all, really, poor boy. He never expected to be betrayed like this.

In the latter part of our post-WrestleMania week, it’s back to news about gorgeous new champion Roman Reigns. The third time he’s held that strap of gold on those strapping shoulders, Roman’s started to get a little fed up of people trying to flirt with him after they find out he’s the champion. That little flirt Sami Zayn and known tart AJ Styles were trying it for a little while, but Roman’s a one man man, always has been and always will be, he says, and shoos them away. And while we all know that’s the truth right now, a little bird tells us things might be quite different when the third and sluttiest ex-Shield puppy, Seth Rollins, comes back into the fold.

Also upsetting Dean Ambrose this week, aside from not being allowed out to play on Monday, and only getting a few scant moments in front of a crowd on Thursday, is the fact that his man leapt on a woman during WrestleMania. Stephanie McMahon looked quite excited to take a younger man’s spear – if you know what we mean – now that her husband’s getting on a bit, and we’ve heard rumours that Dean doesn’t like to share with anyone other than pretty boy Seth. All in all, Roman had better watch out if he wants to be invited back into that tac-vest threesome! But don’t worry, Dean – Roman looked pretty horrified to have touched a woman, so I think your relationship is safe.

Also in the latter part of the week, Chris Jericho seemed to be getting cosy with Sami Zayn’s ex, Kevin Owens! For a heart-stopping moment on SmackDown, it looked like the two were going to lock lips in front of the whole world! Whether there’s something there, or if it’s just sparks, we’ve yet to see, but never fear, we’ll keep you up to date on all the gossip.

Well, that’s it for this week, darlings – and what a two weeks it’s been! Our dedicated researches will keep our eyes peeled and our legs open to make sure we don’t spill a drop of the deliciousness these boys are giving us. See you next week, fellow gaywatchers, and remember – keep it kay-fabulous!

(We would like to state for the record that all views and opinions stated here are purely for satirical purposes and have no bearing on the wrestling stars mentioned, nor the real people behind those characters.)