Hello, fellow wrestling fans, it’s time for another weekly round-up of the hot and shameless romances happening right under our noses on WWE’s programming. We’ve not had to look too closely, but our dedicated research team have been hands off socks and on cocks for you to make sure you’re up to date with all the news.

Firstly, recently single AJ Styles and angry daddy bear Kevin Owens are starting a whirlwind romance, even though Chris Jericho doesn’t seem to be able to leave his ex alone. It’s all a little difficult for these two to get some time alone, and not just because Chris and AJ are still clearly into each other. No, the problem is that The Miz, Dolph Ziggler and Sami Zayn want a foursome with Kevin, but he’s not really sure he’s into group sex. These three men want to get their hands on Kevin’s belt, but he’s a little nervous – it’s just a handjob, Kev, it doesn’t have to go any further than you want it to, don’t worry. All of these boys are nice, and we know where they’ve been, with the exception of Dolph Ziggler, who, when asked, just says ‘everywhere, baby’ and leers. 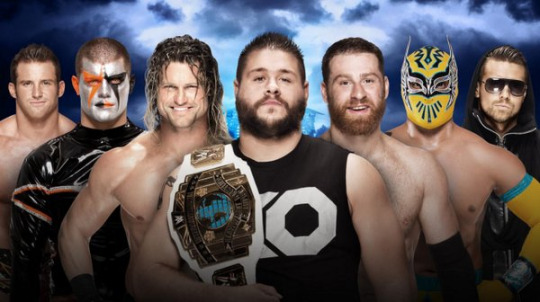 The New Day are out of control! Lining the corridors of Raw with white boys they can force to booty pop, they’re planning an orgy with their multi-national group of sometime lovers, the League of Nations. Stay tuned for more info on this over the coming weeks, guys, because things are getting steamy. Big E licks his hand generously before applying it to Rusev’s backside with tender loving care, which really is just proof that Big E is a gentle lover, and wants to make sure his partners find everything as easy as possible. These boys just can’t stop their hands roaming all over each other – in and out of the ring – and frankly, we don’t blame them!

Big Show and Kane, former lovers and best friends, commiserating on not being able to get through doors and needing special seats when they fly cattle class, meet in the ring for a cuddle and chokeslam session. Don’t worry, our sources tell us that Big Show really likes that sort of thing, and Kane is the only one who can give it to him just the way he needs. Shine on, you crazy diamonds.

In proof that these boys can’t leave each other alone, AJ Styles comes out to interrupt ex-lover Chris Jericho’s match with shiny dancer Fandango. He says he’s going to show Chris exactly why everyone chants for him, and drawls his own name the way Jericho used to pant it when he fucked AJ – which is a little much, to be honest. These two need to learn to let it go, and realise they were never suited for each other, but Styles wants to see them fuck it out at WrestleMania, where they can have sex before a huge live audience, and AJ will call Chris ‘daddy’ again, just the way they both love it. More on that as it develops.

Vince McMahon comes out and says that, it’s true, as his son Shane said, The Undertaker is, indeed, his bitch – even though we seem to see Taker holding him by the throat more often than not. It’s nice to see an older man be able to come out to such acclaim, and not be ashamed of who he is – it’s not always an easy thing for older LGBT people to do, and for him to do it in such a public place just shows how comfortable he is with himself and his kinky gay love affair with an undead wizard. Even if the power dynamics aren’t quite how he says they are. Good on you, Vince – we’re all behind you.

Later in the week, confused on-again, off-again lovers Goldust and R-Truth are still airing their marital grievances on television. It’s a little upsetting, really, to see two older men not managing to get along, or even pull themselves together enough to agree that they were a bad match and aren’t going to get back together. R-Truth thanks Goldust for helping him out in the ring on Raw, and Goldie says he was just looking for his pyjamas – R-Truth then lets us all know that his erstwhile lover likes to sleep in the nude. Keep that stuff under wraps, Truth, a man’s sleepwear is his own business!

Sami Zayn seems to be playing quite the little runabout these days, with an altercation involving The Miz, and Sami’s hand stretching out the waistband of those tiny little work panties The Miz calls trunks. Seems our gingerbread bear cub wants a good look at what Miz is keeping in those little budgie smugglers, and a clothed view just wouldn’t do! Scandalous!

In outside news, we have it confirmed that the love affair between Roman Reigns and Dean Ambrose is still going strong, no matter how little of it we may see in the run up to WrestleMania. These two were spotted reaching for each other during a match with lovely League of Nations boy, Sheamus. These boys just don’t seem to be be able to keep their hands off each other, no matter how many times they’re told! Still, it’s nice to see that lacking TV time together hasn’t stopped these two from keeping the flame burning.

Well, that’s it for another week, fellow gaywatchers. Let us know if we missed any moments you spotted, and remember – keep it kay-fabulous!

(We would like to state for the record that all views and opinions stated here are purely for satirical purposes and have no bearing on the wrestling stars mentioned, nor the real people behind those characters.)